Find all of what Berean Bible Church offers by using our navigation menu below.
Skip to Page Content
About Us | Doctrinal Statement | Constitution | Elders | Missions | Pastors Note | 97' Christmas Crash | Contact Us

A funny thing happened on the way to the Pensacola Orthodox Church Seventh Annual Bible Conference in Pensacola, Florida. Our plane crashed!

Myself, and three other men from our church rented a Piper Cherokee to fly to Pensacola. Pete Griffin who is a Marine Pilot was flying the plane. Also aboard was Rich Nemec one of the elders from BBC and Nathan Cook one of our members.

We took off from Chesapeake, Virginia at 8:00 PM on Christmas evening. It was a beautiful clear night. The stars were shining above and the city lights illumined the darkness below. It was a beautiful smooth flight. We were approaching Columbia Regional Airport in South Carolina for a scheduled fueling stop. We were 28 miles out when our engine quit. Pete went through the emergency procedures and got the engine restarted. About a minute later it stopped again. Pete got it to start again and began to climb to give us a better advantage. The engine died again, and could not be restarted. Our fuel gauges indicated that we had almost an hours worth of fuel left. We could see the airport in front of us but it was apparent with our rate of decline that we would not make it. Pete spotted a large parking lot to our left and decided it was our best bet. As we got closer it became obvious that we could not land in the parking lot. Next to the lot was a field that appeared to have a few bushes in it. As we got closer the bushes turned into trees. 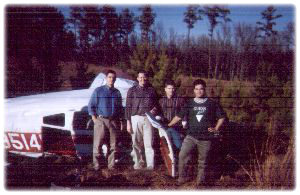 From the time we lost the engine until the time we crashed it was about five minutes. Nobody said a word except for Pete talking to the tower. Just before we crashed Pete yelled, "Hang on!"

Our right wing hit a tree and was torn off. The plane turned on its side and hit the ground and slid about 500 feet. Once it stopped I asked if everyone was okay. They all said they were and I said, "Let's get out of here!" We kicked the door open and we all got out. No one was hurt! No stitches, no broken bones. We all walked away uninjured. Praise God! 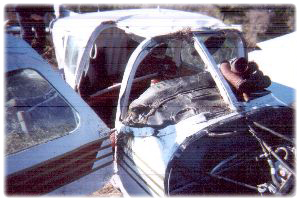 On the way down my belief in the absolute Sovereignty of God gave me strength and peace. The God who loves us was in control of the events of this crash and we all rested in that. What peace, what joy, what comfort to know the Sovereign creator of the universe is in control of all things. We decided not to go to the conference but to get home to our wives and families. We regretted missing the conference but were truly providentially hindered from attending. 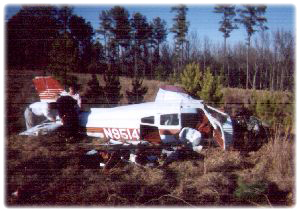 This pictorial is dedicated to the Grace of God.
To walk away from a crash like this is nothing short of pure grace.
Home | Studies | Resources | Health | Contribute | About Us | Location | Email List Sign-up
© Copyright 1997- Berean Bible Church. All rights reserved — Web site designed and maintained by Pendragon Web & Graphic Design
...for they received the message with great eagerness and examined the Scriptures every day to see if what Paul said was true...